To honor this occassion, we've released a very special set of new Order+ for you to play!
Complete the Order+ and receive tons of NP★

Bravo! It's NEO Mushroom Garden's 7th Anniversary!
On such a special occassion, something good might just happen♪
But first, lets go to the theme "Funghi Circus"!
Let's be happy together★

This time's Order+ begins at the theme "Funghi Circus".

▼Have you developed the "Funghi Circus" already? 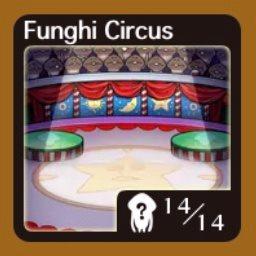 By clearing the new Order+, you can receive tons of NP!?
Hurry, give it a try!

This update, Cromwell is putting in double the effort!
Until the next update, the "Special Medicine" daily limit has been increased.

"Special Medicine" can now be used 14 times a day

Until now, the "Special Medicine" could only be used 7 times a day...now it's 14 times!

▼Tap here to use the "Special Medicine"!

The new theme? Well it's bright, exciting, lots of cute cー *cough* *cough*
Whoops, almost said too much there.

New theme currently under development! Just what kind of theme and food machine will it be? Look forward to it!

Update to Ver.2.44.0 and celebrate this special occassion with all of us!